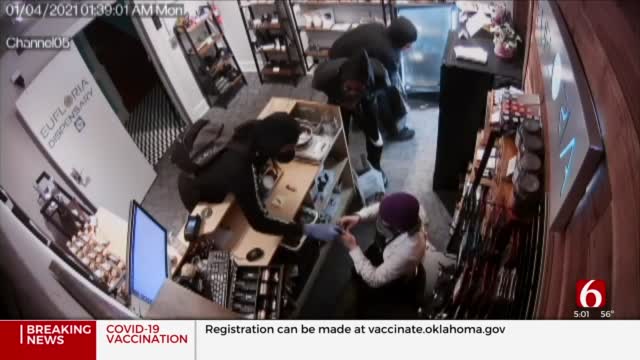 Tulsa Police Robbery Detectives are investigating what they call a 'brazen attack' at a downtown Tulsa dispensary.

"On this one, a simple mistake or flinch, this could have been a homicide very easily,” said Lt. Justin Ritter with the Tulsa Police Robbery Unit.

Surveillance video shows three men go into a dispensary near MLK and Cameron, hold the clerk at gun point and steal marijuana and cash. The video shows one robber putting the gun to the back of the clerk's head, while the other two men clear the cash register and fill up bags with pot.

Tulsa Police said in the beginning of the video, the robber with the gun, pulls down his mask for just a moment, before the three men go inside. He then walks in, and while the clerk is looking at the marijuana card, the robber pulls out the gun and demands all the money.

Lieutenant Ritter said you should pay attention to the gunman's left hand in the video. Ritter said the man has distinct white spots on his hand and believes he could have some sort of skin condition, like vitiligo.

"It's definitely visual and a distinguishing mark that is going to identify this guy,” said Ritter.

Ritter also pointed out the bright blue shoes the robber’s partner is wearing. Ritter said the clerk did exactly what he should do. which is, do everything he was told.

"Instead of just going out and knocking off your local drug dealer, there's now another opportunity, for a business to be robbed, that not only has marijuana, but has high quality marijuana and cash on hand,” said Lt. Ritter. “We are tying a lot of groups, to a lot of different robberies. I wouldn't doubt when we solve this one, we will tie these guys to other cases we are working right now."

Police ask anyone with any information to call crime stoppers at 918-596-COPS. You can remain anonymous and earn a cash reward.